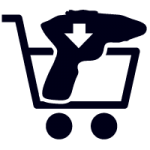 First let’s look at some of the questions that we want to answer.

1. The Chemistry of Natural Light 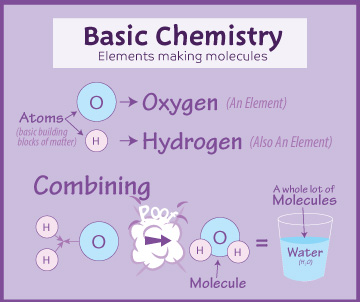 How does nature make light?  Bioluminescence is the result of a special chemical reaction between a protein, a light emitting molecule and oxygen.  Proteins are very special and complex molecules and are the building blocks of life.  In some ways the bioluminescent reaction is similar to reaction that makes water molecules from hydrogen and oxygen (shown to the right), except in the bioluminescent reaction energy is given off in the form of light. Matter = Any stuff you can touch

This is an antioxidant molecule responsible for emitting the light once activated. 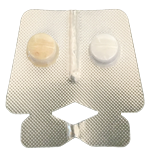 This is the activating protein tablet based on ththat found in a small but very bright deep sea creature called the Gaussia Princep.

2. The Biology of Natural Light

OK … so bioluminescence requires special proteins.  How are proteins made?  It turns out that proteins are made in cells, and every living creature is made of cells of some kind.  Take a close look at this process below.

Of course not every creature’s DNA has the gene (or recipe) for bioluminescent proteins, but for those creatures that do have this gene, these proteins are made in the exact same way.

When exploring to try to find the very brightest bioluminescent creature, we discovered many marvelous luminous aquatic animals, but it was a small animal called a Gaussia Princep that shone above the rest.  Finding it was a challenge by itself since it is very small and lives at an ocean depth of over 2,000 ft, but pinpointing its glowing genes was even harder.   With 30,000 genes in its DNA to have to look through, it took a long time to find what we were looking for.  Once we found the glowing genes, we used a method called expression cloning, to make copies of the proteins. Using the example of Sally again, this process is like giving Sally some new books with cake recipes and asking her to start selling cakes. To do it in real life, the glowing gene is inserted into a safe and healthy organism that can read the instructions and produce large amounts of protein. Even after the protein is made we have to make sure it forms into the proper shape, because if it doesn’t, the protein won’t make light. Shaping the protein is called folding and it took us many years of trial and error to get it just right, and to do it in such a way that we can now make large amounts of this protein.
PatentsManufacturingTerms & Conditions
Issues with Shopping?Privacy Policy
Our StoryContact Us
Issues with Shopping?Privacy Policy